When Clifton Pilot Gig Club in Bristol enquired about a new Gig last year, this one was on the starting blocks and off already! All Pilot Gigs are built to the same specification, so Brian already had the keel down and had started the planking before the order came through.

The build progressed through the winter and in Spring minds turned to colour schemes. Brian is a definite paint man. Not only does he think that it’s the right look for a Pilot Gig, but varnish can sometimes bring future problems. What happens is, tiny cracks can appear where the parts of the boat move against each other, a little sea water seeps under the varnish and then can’t dry out very quickly. The resulting constant moisture encourages mildew to grow and tannin’s to leach out of the wood (and stain around metal parts like rivets). This causes unsightly black patches appear in what was a pristine varnished surface. You might think the answer then is simply to paint over it, but varnish is never a very good surface to subsequently put paint on.

Clifton Gig Club wanted varnished wood; and who wouldn’t when it looks so nice! Personally, my only problem with varnish is that I am never allowed to put as many coats as I would like to get that deep glassy shine. In the end, a compromise was reached with everything below the waterline – inside and out – getting paint, and above the waterline getting varnish.

When the construction phase was finished, the boat was turned upside down so the hull could be seen to. The planks are riveted together with copper boat rivets which are set as flush as possible with the surface of the wood. If it’s painted, all that’s needed is a little rub-down with sandpaper to get rid of the stray wood-fibres, and then the coats of paint will fill most of the little holes, a little judicious filler will smooth out any bigger holes and sunken rivet heads. Where the wood is going to be varnished, on the other hand, it pays to sand the wood so that the rivets are uniformly flush, because you can’t use filler. It’s also a chance to run the sander over any scarf joints, filled knots, glue etc, working through finer grits until ready for paint primer and varnish. The two-pronged paper flag taped to the bow was an idea for fitting the large letters of the name into a completely painted background. But this was rejected in favour of having the letters spill over a triangular painted flag. 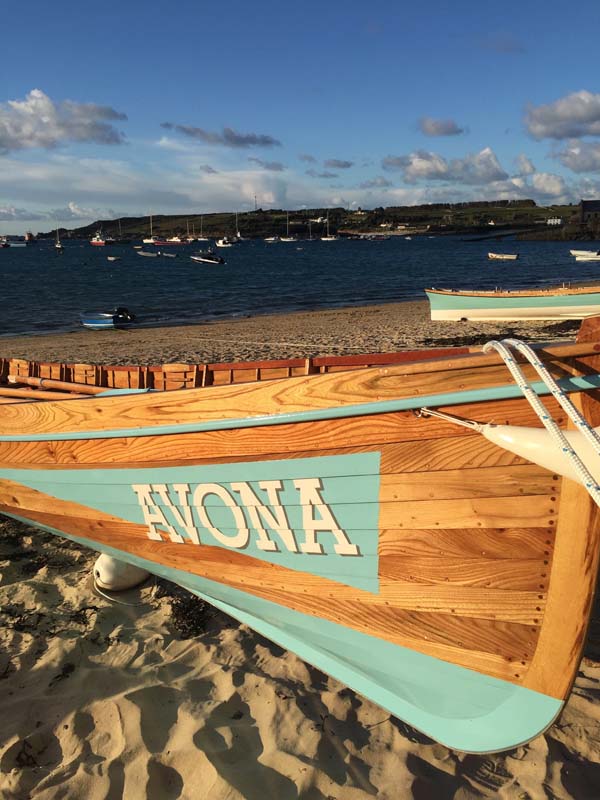